How do I go about creating a character?[]

There are as many different ways of creating characters as there are players, but there are three essential elements that are needed to use a character in the game - these are, in no particular order, a profile, background and a model.

The profile comprises the characters stats, his equipment list and any special abilities he might have. Most novice players create the profile for their first character(s) using the sample statlines in the back of the rulebook, however many veteran players have concluded that these stats are a little too high to make for a fun game and prefer to work from the descriptions of each stat at the front of the rulebook. Using slightly lower stats shouldn't be looked at as implying that players should use wimpy characters - instead the idea is to increase the amount of tension in the game. For example, a character with Ballistic Skill 95 is unlikely to ever miss, so there's little tension whenever he takes a shot as it's an almost foregone conclusion that he will hit.

Some players like to randomly generate their character's profile, reasoning that if they rolled Weapon Skill 86 then it must be 'fair', however many veterans would argue that just because a value was rolled randomly, it doesn't mean it is appropriate for the character. That's not to say there's no place for random character generators, but if you do decide to create your characters in this way it is well worth comparing the generated profile to your concept of the character to ensure they match. For example, if you envisioned your character as being good with a sword, but a poor shot and the randomly generated profile instead gave him a low Weapon Skill but a high Ballistic Skill, then feel free to swap the values around, or to just choose new ones.

Some good advice on creating profiles can be found at the Conclave Standard page. 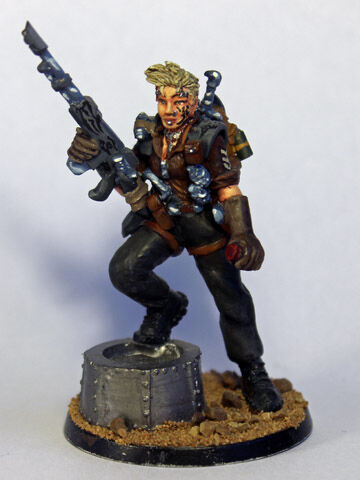 A character's background usually tells their story up to the point where they start appearing in games. It can be written in many forms, such as a biographical statement, a piece of fiction, or an Arbites report on their activities. It's purpose is to describe a characters motivations and explain why they are involved in the shadowy battle for the Emperor's soul. When posting your first character it can be tempting to skimp on this section, but without it people are unable to advise you if your character's profile is appropriate - for example, it is impossible to say whether Weapon Skill 75 is right for your character without knowing something about what level of training he has had and his combat experience.

Writing background can be difficult if you are not well versed in the 40k universe, however veteran players will be only too happy to help you come up with a great story for your character. If you do not feel confident to write a detailed background for your character, the best thing to do would be to post a set of bullet points about your character concept including as much detail as you can. In this case, it is probably not worth worrying about the characters stats until you have fleshed out their background some more - at this stage it would be enough to say that your character is 'good with a sword' and worry about the exact Weapon Skill value that 'good with a sword' equates to at a later date.

There is no set length for written background; some people like to write thousands of words, others manage with less than a hundred - however if you are asking people to review your character then you probably need at least 200 words in order to be able to include enough detail for people to know whether the profile fits the background.

Some helpful suggestions about things you might want to include in your character background can be found in this thread on The Conclave.

If you need advice on how to represent your character in model form, then you could post a few bullet points on how you want them to look and you'll probably be inundated with suggestions for models. Alternatively, this thread on The Conclave includes a list of manufacturers of 54mm models suitable for Inquisitor.

Community content is available under CC-BY-SA unless otherwise noted.
Advertisement